Are Raj and Vanda truly "Aggressive"?

I am, by no means, an expert. I scour the net looking for great articles I think people will find interesting. I will, of course, give full credit and a link back to the site where I got them.

Reading the past article on 'aggression' I found that many behaviours we label as 'aggression' are really not so. "Leash reactivity" is one of them. I like that she chose to call it "leash reactivity" because I truly believe that, in many instances, the dogs just want to get to know the other dog but we are too paranoid to let them meet because we read their lunging, barking etc. as aggression as opposed to curiosity or frustration.

I think Vanda falls under this category and, to a certain extent, Raj does too. 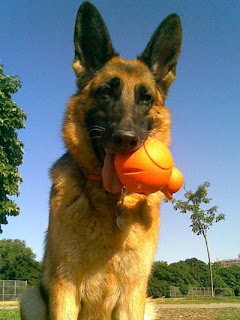 There is also territory-guarding component, which she doesn't mention. On the rare occasion when Raj is off-leash in his "territory" (around the building where he lives in) and he spots another dog in what he thinks is "trespassing zone"  I believe he thinks it is his job to drive them off.  I believe this because he stops short when he reaches the other dog and does not make contact. I don't feel he wishes or intends to cause the other dog any harm but rather that they simply leave the territory. People have called this 'aggression' and have called me out for not being 'Alpha-enough' to stop him.  I am not saying this behaviour is acceptable in the dog-crowded neighbourhood in which i live, I am only saying he has no intention of hurting the dog.

Mind you, in the park he CAN be a bit of a 'Tarzan'  because he 'gets off' on throwing his weight around most especially on large to mid-sized dogs who look like it would be fun to terrorize. That is REALLY embarrassing. However, it has been a very long time since he has actually made contact and a quick, sharp "OFF" stops him. I am quite sure he gets a 'rush' from this so I leash him immediately if he doesn't come "OFF" as soon as I say it. I am happy to say, Raj has not actually engaged in a fight in a very long time. 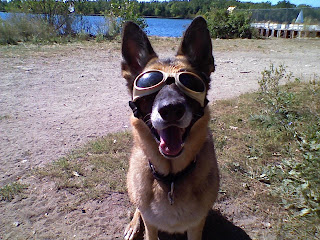 The other senerio where he behaves in what most would say is "aggression" is when a young puppy violates his personal space and runs up in his face while he is lying down with his ball. The puppy is too young to read his prior signals "go away" so, without getting angry he 'ratchets' it up and 'roughs up' the puppy sending him screaming off. Then he lies back down having accomplished banishing the rude 'space offender'.

I don't find this acceptable behaviour either. Make no mistake. So, whenever I see a puppy I think will trigger him and who is running wild, and, where the new owner is not controlling the puppy at all, I simply remove him from the vicinity of the puppy so as to avoid this 'lesson in manners'.  I see it as partly the puppy-owners responsibility to monitor their puppies behaviour but none seem to think anything the puppy does is in need of dealing with. I find this very frustrating and so does Raj.

Vanda, on the other hand is truly exhibiting "leash reactivity" when she barks and lunges at dogs on leashes when she is really saying: Why can't I go meet that dog? She is frustrated at not being able to 'meet' the other dog and it causes her to become highly charged and reactive tho I do not believe it is rooted in 'aggression'.
Nonetheless, I wish she wouldn't do it and am working on her to try to 'calm' her and stop this behaviour.

It makes it all the more difficult because they are German Shepherds and nobody will let her near the dog to satisfy her desire to meet the him or her.

I don't have this problem 'fixed' for either of them completely but what I do when I see an approaching dog (on the crowded street) is to quietly, and unobtrusively, gather their leashes short while never actually pulling or making the leash taught. As we approach a dog that I think they MAY react to I give them loads and loads of calming, friendly, words to 'guide' and/or distract them so as to let the dog pass without incident. 8 times out of 10, it works and I reward them for their good behaviour.  The reason I shorten the leash is because they may decide, despite my best efforts to lung and bark and I want to make sure they don't get a chance to frighten the other dog and the owner with their displays.  The owners of the other dogs appreciate that I 'collect' the dogs and, in turn, feel less anxious about my dogs passing as they can see I have control of my dogs. This reassurance acts to lessen the fear or panic they feel towards both my dogs and their own which, lessens the over all arousal and stress as we pass.

Also, I take them by the back alley TO the park as it is at the beginning of the walk they are most excited and the least able to self-monitor. After a good long run and games of fetch, they are much more receptive to letting dogs pass and so I practice walking down Queen St. when they are most likely to have success letting dogs pass without incident, for which I alway reward them.

I have also been doing some serious reading on the subject and Patricia McConnell, who is a zoologist and certified animal behaviourist, states that ALL mammals (no matter the species-including Human) have genetically predisposed 'comfort zones' regarding proximity. Some are more comfortable with less space while others have a much wider 'sphere of comfort'. While nurture (i.e. what WE do to alleviate this) plays a huge role. The fact still remains that they have it in their genes and so this should be respected, dealt with compassionately and not punished. We can help them feel more comfortable beyond their genetically predisposed comfort zone but it requires quiet understanding and patience.

Just imagine it for yourself. Many of us, myself included, HATE crowded malls and public transit. I can learn to adapt because I can 'intellectualize' that I have to such and such. Dogs, though, need help and reassurance. Some dogs are 'touchy-feely' and others not so, just like some people.  I believe it is the caretakers responsibility to work with their dog's comfort zone in a compassionate and patient way.  They, like us, can learn to tolerate closer proximity but they will never actually like it.

I am TERRIBLY excited about the upcoming seminar by Patricia McConnell next weekend because it is this very issue she will be dealing with. I am quite sure she will enlighten me on how to deal with this issue more effectively and I will take notes and pass them along to my blog.
Posted by Anne Gibson at 4:46 AM