The Complex Language of Dogs

Dogs have their eyes balls, eyelids, ears, tail, muzzle, lips, teeth, legs, paws and spine, as well as jumping, spinning, stalking, sniffing, crouching and hackles to visually communicate. That is not including the wealth of vocalizations they use.  What a cornucopia of tools dogs have to communicate with while we, basically, just use our mouths to talk!
Sure, our face expresses a lot. It sometimes even reveals lies. You know, the all-to-familiar through-the-teeth grin that is not accompanied by 'smiling eyes' that belies the hidden truth that the smile is, indeed, disingenuous? We can do that. To the watchful eye, much can be learned by facial expressions in humans. But, by enlarge, we rely on speech. Heavily! 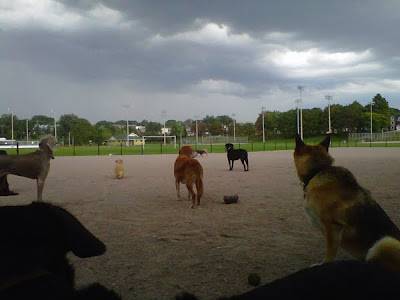 Here are a group of dogs standing stark-still as a massive cloud and impending storm rolls in. They are all looking for any information on what will be coming. Their ears turned sideways or slightly back in order to gather the maximum auditory information possible. None are alarmed, but they all are watchful and aware.
I need to give credit were credit is due. I found a link on my friend Andre's web page (When Hounds Fly) and it includes a series of 97 pictures of dogs expressing complex and fleeting emotions, thoughts, states of mind etc. through images. I was mesmerized.  The link is The language of dogs.
I sat for the longest time pondering in wonderment at each of the images they presented along with commentary on what, exactly, was being communicated between the dogs. What a great insight!
One of the things I loved about Patricia McConnell's seminar was the bulk of video footage she brought with her to show 'communication in motion'. However, we could not hear their vocalizations very well, nor could we clearly see the micro-expressions because they are too fast to be seen on the screen.
The fact is, dog communication is a complex set of indicators that are best understood in concert.
So what have dogs got in their roster?
1) Strictly static, yet fleeting, visual cues that use virtually every part of their body (e.g. flash of white in their eye, position of the tail, curve of the spine, dropped head and so on)
2) Vocalizations which are often too low or subtle for us to discern (e.g. vry low growl that we cannot hear but occasionally feel as the vibrations are carried from the collar and up the leash to our hand)
3) The stringing of discrete signals linked to communicate either complex or simple messages (e.g. the 'charge' or a 'roll over'. In these cases, too though, each "string of signals" will make the intention of one ‘roll’ or ‘charge’ very different from another.)
The web link "The language of dogs" though complex and inclusive of hundreds of split-second signals that it is, it lacks both the stringing of signals into a complex message (that requires video tape or live observation), and the wealth of auditory signals accompanying the images.
body posture high and low 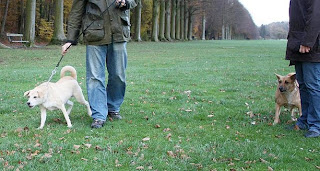 The beige dog on the left has a high body posture. Ears are forward, tail is up, gaze locked to the other dog, wrinkles forming to the muzzle as she bares her teeth. In the picture she's lunging.
The brown dog on the right seems much more ambivalent. She's afraid of the approaching dog, and because of her fear she is reacting aggressively. Her ears are to the side, tail is slightly up, face is smooth and corners of the mouth are back. She's leaning a bit backwards.
And we thought our dogs were dumb! We should be ashamed of ourselves. Even further, we should be ashamed of ourselves for talking to them and calling them dumb because they don't understand plain English when their language works so much better for them!
It's my blog and I'll say this if I want to. We humans are the dumb ones. In fact, dogs are more capable of reading our body language and even a good deal of our English words than we are in doing the reverse. They are masters at reading us even when we don't want them to. (Try getting your door keys without your dog reacting.) Yet we remain blissfully ignorant to the greatest way to get in side our dog's minds and that is by simply making the effort to understand their language.
I have been reading Stanley Coren's "How to Speak Dog". Now, Stanley Coren is a human psychologist not a scientist. He has a lot of great insights but I keep saying to myself, "Stanley, did you just observe that by yourself and come up with it or is there some kind of study from which you gleaned what you just claimed?" Nasty, I know. But we are so susceptible to anthropomorphizing (seeing everything in human terms) that we often impose our own expectations on dogs without really understanding that they have their own system already in place. Granted, a lot of our body language is similar. But a good deal is not and I want studies and qualifications for claims that seem just a little too anthropomorphic.  So, I read Stan with a grain of salt.
But, seeing the images on the flickr sight leaves little room for doubt. Each image has a caption. Once you get the hang of it, if you look very carefully, you will see many, many subtleties in communication between dogs that you never saw before. And dogs, like us, keep trying to use their own language to express how they feel to us just as we do the to them!
meeting the beagle: 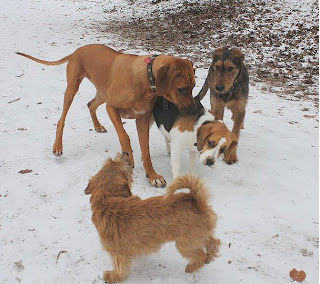 Sniffing is over. The terrier has already stepped a bit further and is ready to leave the scene. The ridgeback is trying to push the beagle to run, her ears are coming forward, there are wrinkles on her forehead, her gaze is locked to the beagle. She is making little jumps in the beagle's direction, trying to make her run. The ridgeback's tail is wagging, but it is not friendly: she is in a prey mode.
The beagle knows this. She doesn't move, she knows that the bigger dogs would chase her like a prey. The beagle lowers her head even more, keeps an eye on the other dogs without looking straight at them to avoid conflict. Her tail is down.
At this point we called our dogs away, because the beagle was clearly not enjoying the situation. Our dogs returned to us and left the beagle alone. The beagle found smaller, friendlier dogs to play with.
How many times have you heard humans say "Oh stop that, you silly thing!" all the while cajoling the dog with our body language into thinking we are playing with them? Confusing? You bet!  Or, even worse, "Come here Bessy, NOW!" while we are standing, square shouldered, making direct eye contact and barking out with our body language and tone that they must "Stay away or else" in dog language!
Make up my mind!!!!!!
We expect dogs to fully comprehend our body language, even when we use it incorrectly or misleadingly, and our human language even when we have never taught them to translate it!
Anyway, if anyone is interested in seeing and understanding critical microexpressions dogs use all the time to communicate to both us and other dogs, have a look at the link “The language of dogs”. Spend some time with it and then have a look at your own dog at play or when he or she is desperately trying to tell you something you don’t understand.

Posted by Anne Gibson at 1:27 PM No comments: